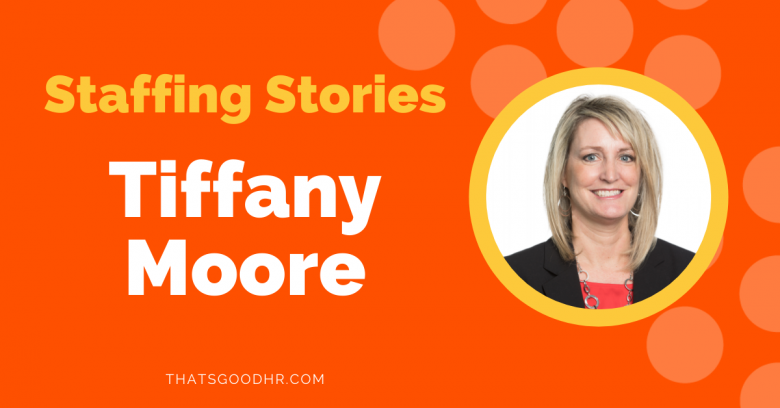 Tiffany Moore has been connecting people to jobs for as long as she can remember even though she didn’t start out in staffing immediately. Upon her graduation from Purdue University, Tiffany’s first job was a payroll position, which is one of the many positions she staffs today.

After a couple of years in her payroll position, Tiffany changed jobs and eventually became an HR Supervisor at another Indianapolis-based company. It was in this role that she fell in love with recruiting. Recruiting was a natural fit for Tiffany since she loves to talk to people and not just small talk! Her passion lies in really getting to know people, which is what makes her a fantastic recruiter.

For eight years, Tiffany focused most of her time recruiting for accounting and finance positions. She was content but in January of 2006, her husband showed her an article in the Business section of the Indianapolis Star about a company named That’s Good HR. He had worked out with one of the TGHR employees that were highlighted in the article at his gym. There was not only that connection, but also one of Tiffany’s former coworkers had gone to high school with TGHR Owner Mary Springer, bringing the connection full circle.

Tiffany was introduced to Mary but the timing wasn’t right for both of them. Fast forward to a year later, Mary knew exactly who she wanted to fill an open position at That’s Good HR, Inc. – Tiffany Moore. The position allowed Tiffany to get back to her roots by recruiting 100% of the time for accounting and finance positions.

When Tiffany first started at That’s Good HR her responsibilities included everything from recruiting to sales. In 2010, Tiffany changed her focus to client relationships, which is where her role still is today. She has been able to take her passion for getting to know people in order to connect with her clients to truly understand their staffing needs.

Twelve years later, Tiffany marvels that she still loves to come to work every day. The biggest change Tiffany as seen in the past 20 years is even though technology has changed, in many respects it has made things slower. People are in meetings more and since email is so prevalent, it makes it harder to talk to people either on the phone or face-to-face.

But not to worry, Tiffany’s drive to get to know people on a deeper level is what makes her successful. Her values of honesty and integrity shine through with her clients. If she wasn’t working with her clients all day, Tiffany says she would be a financial analyst or a meteorologist. With her obsession with the weather, her co-workers think she would make an amazing meteorologist.

Do you have a story about how That’s Good HR has impacted you in the past 20 years? Let us know as we are sharing staffing stories all year long as part of our 20th Anniversary Celebration!